Art Briles Symbolizes the Loss of Innocence for College Athletics 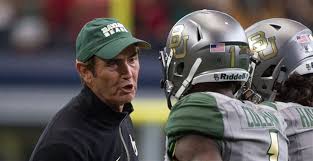 This week has been a horrible week for Baylor football fans.  Our beloved coach who finally brought the Baylor Bears football program to national prominence has found himself in a real mess.  The tragedy is that we know the core of Art Briles as a man of integrity, grounded in his Christian faith and extremely passionate for the game.  Art genuinely cares for his players and has an intense and contagious desire to win.  However, Art Briles is also human.  Conference championships, Heisman trophy winners, and new river-front stadiums create fame, National TV exposure on ESPN Gameday, fortunes, high expectations, and extreme pressure to win.

The boys who make up the program have just left the nests of their hometown and are experiencing independence and freedom living on their own for the first time .  They don’t have their parents, siblings, family and community to hold them accountable.  They have been recruited from their humble positions because they were good athletes in high school by powerful men that appeal to their egos and offer the very best the world has to offer. The very young men who are still early on in developing their own identity in one day step from a regular high school kid into the big-time college football world of power, fame and fortune that is totally unknown to most of us.  The young men who enter this program, wear the uniform, and drink from this fountain of success are in no way prepared to handle the privilege and responsibility that comes with being part of a successful college football program.

Operating under extreme pressure, 24 hour a day scouting, recruiting, planning, university appearances, fund raising, speaking engagements, preparing and coaching football we also expect our coaches to parent and police the activities of these testosterone-filled, recently independent and uniquely privileged young men on a campus surrounded by thousands of beautiful young women and party every day temptations.  It is an impossible task.  With all the responsibilities and expectations of our coaches it is certainly understandable to see how dismissing the many innocent mischievous events, looking the other way at a few general misconducts, and then working with authorities to downplay some criminal behavior can be rationalized, but leads down a path of destruction.  There is so much at stake.  First, the lives of the young women and others that are forever changed because of the poor choices of these young men.  Secondly, the efforts to recruit these young men, the talent that they possess, the personal relationships developed, the aspirations for their individual success and the tragic loss and impact to their future if they were dismissed from the program also weigh heavily on a coach.

The board of regents took the right action.  It was too late.  Evidently there was a pattern of concealing transgressions and looking the other way.  Had they admitted to the problem earlier, confronted the difficult decisions head-on and made the tough personal choices the fans, media and world would have had compassion on them, given them second and third chances to fix the problem.  It was too late.  Proverbs 28:13 tells us “He who conceals his transgressions will not prosper, but he who confesses and forsakes them will find compassion”.

We can all learn from this tragedy.  All of us are corrupted by small compromises.  All of us conceal transgressions.  We must recognize that these decisions and non-decisions will lead to destruction.  However, if we recognize our sin, confess this as sin and forsake it so as not to continue down this path we will receive compassion.  Compassion from our friends, family, co-workers, fans, media and even our God.  Remember 1 John 1:9 “9 If we confess our sins, He is faithful and righteous to forgive us our sins and to cleanse us from all unrighteousness.”  Because of grace, we also all have the opportunity for redemption.  John 3;16 “16 “For God so loved the world, that He gave His [a]only begotten Son, that whoever believes in Him shall not perish, but have eternal life.”

The situation we have created for our players, coaches and administrators in college football is an impossible situation.  It is impossible that the situation at Baylor does not happen every day in every major college program in the nation.  It is also too late for college football.  College athletics has forever changed from an athletic competition to an entertainment industry.  The loss of Art Briles symbolizes a much bigger loss –  a recognition of the loss of innocence for college athletics.

This entry was posted in Family Leadership and tagged Art Briles, Baylor Football. Bookmark the permalink.