Family Activity: How to Teach Your Children to Treasure God’s Word 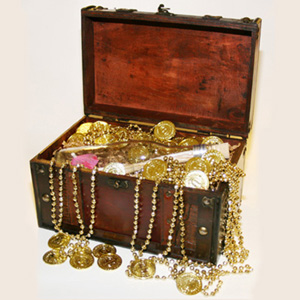 One of our greatest privileges is to introduce and teach our children to treasure God’s word.  We all enjoy a good mystery or lost treasure story.  For centuries people have told stories of buried treasures, lost mines, and sunken treasure ships.  Many books and movies have glamorized and fantasized about the mystery and adventure of finding a lost treasure.  Indiana Jones was the hero of my youth pursuing lost antiquities including the ark of the covenant in Raiders of the Lost Ark.  Occasionally someone actually finds a lost treasure that sparks the adventurer in us such as finding King Tutankhamun’s tomb or the find of the Black Swan treasure ship that fuels our dreams and imagination.

To help illustrate the value of God’s word I thought it would be fun to make up a treasure hunt of my own.  We have a very old and large oak tree that sits by a creek near our home.   The oak tree was often a destination for hikes, rope swings, and tree climbing adventures.  I thought it would be fun to plant a story that there was a legend of a lost treasure that was buried around this tree.  We told a story of a Texan that made off with a load of gold coins from Santa Anna’s army in 1836 around the time of the battle of San Jacinto.  The legend goes that the Texans buried the treasure near an oak tree in this area and it had never been found.  I built up the story for a year or so as we visited this spot and we named the big oak tree the “Treasure Tree” and still call it that to this day.  I purchased an old wooden box from Hobby Lobby and filled it with coins, mardi gras beads, and put a bible on top.  I closed the box and buried it a few paces from the tree.  I put a treasure map in an old clear glass bottle with a cork and buried it along the trail with just a piece of the bottle exposed.  We arranged for a Sunday afternoon walk in the woods where we often look for deer sheds, bones, and other surprises.  As we walked by I pointed out the glass and began to uncover the bottle.  What a thrill to find the bottle contained a treasure map and note of a great treasure saved for centuries for us to find.  The excitement of the possibility that it was a real treasure map was crazy.  We headed back to the house to get a shovel to begin our expedition.  We followed the map to the creek and identified a couple landmarks including the Treasure Tree.  Marked 15 paces due west of the Treasure Tree we began to turn the dirt to see if we could find the treasure.  To the kids amazement the shovel hit a hard object that when exposed could be identified as a wooden box with brass shackles.  A flurry of activity and excitement followed as we pulled the box from the ground and surveyed the prospect for real treasure.  We opened the box to see fake gold coins, mardi gras beads, a note from Dad, and a Bible in the center.   To be honest I received a mixed reaction of wonder and disappointment as they realized the hoax, but thoroughly enjoyed the adventure.  I read a brief note of my love for them and my desire to teach them of the greatest treasure that God has for us.  I included the verse Psalms 119:9 that asks the question “How can a young man keep his way pure?” and in vs. 11 it says “Your word I have treasured in my heart, that I may not sin against You.” You might also want to use the verse in Matthew 13:44 “The kingdom of heaven is like a treasure hidden in the field, which a man found and hid again; and from joy over it he goes and sells all that he has and buys that field.”

It is our privilege to teach our kids to see the treasure we have in God’s word.  Although our lives and daily actions are the way to model and teach our kids to treasure God’s word, this is a fun activity to illustrate and create a memory they will never forget.  You don’t have to wait a year or go to the extent that I did in dreaming up this activity.  You could simply plan an afternoon adventure to a park, friends farm, beach, or other good hiding place that takes a little time and creativity to set up, but will be great fun and teach a great lesson to treasure God’s word.  So, make it a fun adventure and teach your kids how to treasure God’s word in their hearts.  In looking for a photo for this blog, I found a place that may make it easy to set up your next adventure that sells a treasure chest and glass bottle.  http://www.oceangramstore.com/Product_TChestOG.htm