Can God use Donald Trump for His glory? 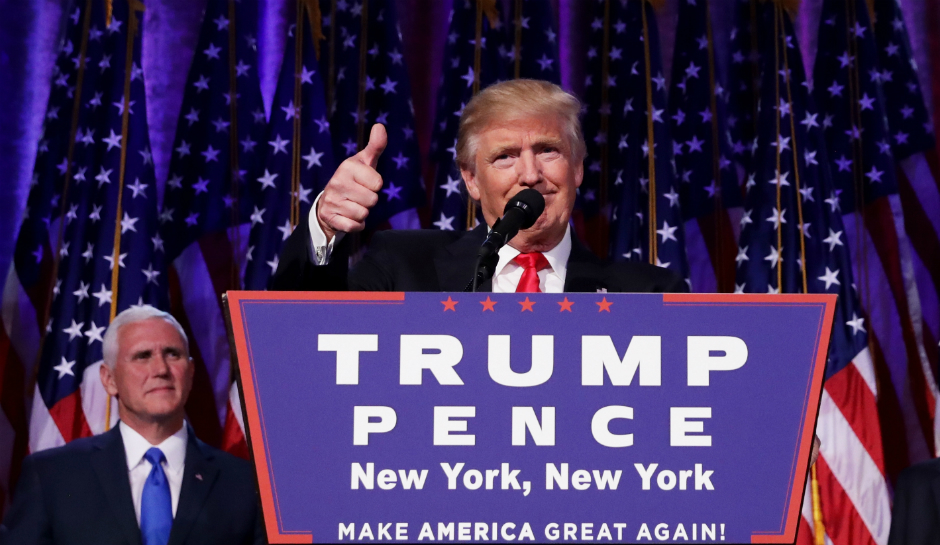 Daniel 2:20-21 Daniel said, Let the name of God be blessed forever and ever, For wisdom and power belong to Him. It is He who changes the times and the epochs; He removes kings and establishes kings; He gives wisdom to wise men and knowledge to men of understanding.

The Republican primary started with 16 candidates.  The least likely and most unqualified was Donald Trump.  It was a presumed publicity stunt for the Trump brand, but his unpolished, in-your-face, anti-establishment rants won him a fan base.  There was no way Donald Trump would survive against these other polished, qualified, well spoken candidates.  One by one dropped and Donald Trump won the nomination.  Polls said 60% of the Republicans could not stand to think they would vote for Donald Trump.  He could not seem to control himself and responded unprofessionally and improperly to criticism.  His opponents and the sitting president claimed he was unfit for the Presidency, he was a loose cannon and unpredictable.  His repeated gaffs, crazy antics and seeming inability to control his emotions made for great Saturday Night Live skits.  He offended nearly every minority group and was an embarrassment to himself and our political process.  NBC released recordings from Access Hollywood of his sexist, arrogant, ego maniac comments made about women.  Donald Trump is a deeply flawed person and candidate that is unfit to be President of the United States.  His opponent, Hillary Clinton, is also a deeply flawed candidate but immensely qualified, has the backing of the sitting President, media-elite, educators, rising minority population.  Hillary is well spoken, stays on message and seemed unstoppable.

The stakes for the election are very high.  The next President will have the opportunity to appoint several judges to the Supreme Court which will shape the laws of our country for the next generation.  Our nation has lost it’s moral compass and secular humanism is driving social change where we have seen the “progressives” push for legalized marijuana, legalize same sex marriage, blurring gender identity, open borders and expanded abortion rights just to name a few. Our churches for the most part have remained silent, failed to effectively share the good news of great joy for all the nations, failed to live out the truth of Jesus to attract this generation to know the love, grace and mercy that God has for his people.  We are past the tipping point and on the fast downward slide of self glorification and idol worship of our culture.

But there is a remnant, a minority in our nation that still knows the God of the ages.  Behind the scenes millions of Christian Americans got on their knees and prayed for God’s mercy.  Considering the terribly flawed options presented by both parties, Christians prayed for God’s mercy on our nation.  Evangelical Christian leaders came together to pray for America and support and pray for the candidate that ran on the Republican platform.  According to the Washington Post 80% of evangelical Christians voted for Donald Trump.  Against all odds and all predictions Donald Trump won the Presidency.

The peaceful transition of government that is the beauty of American democracy has been initiated.  Donald Trump has appointed Governor Mike Pence, who is well-known for socially conservative policies, to lead the transition team.  It is notable and hopeful for our nation and evangelical Christians to see that Donald Trump is nominating men and women that are outspoken committed Christian leaders to the highest positions of leadership in our government.  Some of the names emerging for Trump’s transition team include former Governor Mike Huckabee and Governor Sam Brownback, a socially conservative Catholic, are being considered for agency posts according to Buzzfeed. Ken Blackwell, a senior fellow at Perkins’ Family Research Council, is overseeing domestic policy for the transition team, according to Politico. Others that have stood for Christian values include Senator Jeff Sessions, Reagan aide and former Attorney General Ed Meese, and immigration conservative Kris Kobach. Other names that will likely serve in top leadership spots include Dr. Ben Carson, Rudy Giuliani, Newt Gingrich, and Michelle Bachman.

Is it possible that God can use Donald Trump for His purpose and His glory?  As I struggle with the person of Donald Trump leading our country I reflected on the people God has picked to use for His glory.

Moses – Had a speech problem.

Samson – Was a womanizer.

Rahab – Was a prostitute.

Jacob – Was a cheater.

David – Was a murderer.

Naomi – Was a widow.

Martha – Worried about everything.

Zacchaeus – Was small and money hungry.

The Disciples – Fishermen who could not stay awake while praying.

Paul – A Pharisee who persecuted Christians before becoming one.

God did not choose people who were the “most likely to succeed” or the most popular and influential candidates, but worked supernaturally through the broken, the weak, the left behind, the sinners, the unreligious and the outcasts.  Those least likely to bring honor and glory to God He chose to represent Him and do great works that changed the world for His purpose and His glory.  Can God use an immensely flawed Donald Trump?  Can God use me or you?  Yes He can!  My hope is not in Donald Trump or in the people he puts in place of leadership, but in Jesus Christ.  My hope is that God has mercy on us and bestows His undeserving grace on our nation so that we may respond to His call to know His love, worship Him and love our neighbors.  God is still in control.  May God bless America!