Christians Celebrate the of Feast of Tabernacles 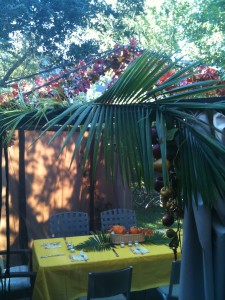 Did you know that it has always been the desire of God’s heart to dwell in the midst of His people?

As God led the children of Israel out from Egypt into the wilderness where He cared for their every need, He instructed Moses to build Him a Tabernacle where He could live in the middle of their campground.

In later years, He instructed David to build Him a dwelling place in Jerusalem as a house of worship of Him.  David’s son, Solomon, built a glorious Temple where His Divine Presence dwelt in their midst.

About 1000 years later, as the Christmas story tells us in John, the Word became flesh and dwell-ed or tabernacled among us.  Jesus, the Word of God, took on human flesh and lived on earth with His people.  Before Jesus was crucified, resurrected from the dead and ascended into heaven, He told His followers that He would never leave them nor forsake them, but would send His Holy Spirit to live within the heart of every believer.

So, as Christians, we celebrate the Feast of Tabernacles to look back to when God dwelled in the wilderness camp, to when His shekinah glory filled the Temple, and to when He lived in the flesh among us in Jesus.

We celebrate His living within the heart of every believer through the Holy Spirit today, and we look forward to the time when He will come again to set up His kingdom here on earth as our Messiah, our King of Kings and Lord of Lords.

God commanded His people to celebrate 7 feasts during the year.  The word for feast is “mikrah” which means dress rehearsal.  As we celebrate our dress rehearsal tonight, we are giving witness to the joy that is within us, because He is dwelling within us today, and we look forward to His coming again soon.

Leviticus 23: 39-43  39 “‘So beginning with the fifteenth day of the seventh month, after you have gathered the crops of the land, celebrate the festival to the LORD for seven days; the first day is a day of sabbath rest, and the eighth day also is a day of sabbath rest. 40 On the first day you are to take branches from luxuriant trees—from palms, willows and other leafy trees—and rejoice before the LORD your God for seven days. 41 Celebrate this as a festival to the LORD for seven days each year. This is to be a lasting ordinance for the generations to come; celebrate it in the seventh month. 42 Live in temporary shelters for seven days: All native-born Israelites are to live in such shelters 43 so your descendants will know that I had the Israelites live in temporary shelters when I brought them out of Egypt. I am the LORD your God.’”