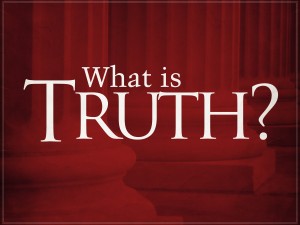 Jesus "If you continue in my word, then you are truly disciples of Mine; and you will know the truth, and the truth will make you free." John 8:31-32

Knowing truth is the foundation upon making good decisions.  However in the world of educated relativity that we live in truth has become accepted as truth interpreted by the wisdom of man.  I believe that God has ordered the world and has made His truth to be universally known.  The apostle Paul tells us Romans 1:18- 23 “For the wrath of God is revealed from heaven against all ungodliness and unrighteousness of men who suppress the truth in unrighteousness, because that which is known about God is evident within them; for God made it evident to them.  For since the creation of the world His invisible attributes, His eternal power and divine nature, have been clearly seen, being understood through what has been made, so that they are without excuse.  For even though they knew God, they did not honor Him as God or give thanks, but they became futile in their speculations, and their foolish heart was darkened.  Professing to be wise, they became fools, and exchanged the glory of the incorruptible God for an image in the form of corruptible man and of birds and four-footed animals and crawling creatures.”  And in Psalms 19:1 “The heavens are telling of the glory of God; and their expanse is declaring the work of His hands.  Day to day pours forth speech, and night to night reveals knowledge.”

There are others that do not believe in God and professing to be wise distort, deceive, and dilute the truth to fit their needs and make truth appear to be something debatable.  Truth is not up for debate and does not change with society or time.  Our society may not like truth, but that does not make truth less true.  As parents we have the privilege of communicating and living out truth that God has given to us through his Word in the lives of our families.  As leaders in our businesses we have the responsibility for making right decisions governed by God’s truth.  We use truth to recognize lies and we testify to the great wisdom and blessings that are the fruit of trusting in and following the truth.  Paul also says to the church of Colossae in the letter to Colossians 2:8 “See to it that not one takes you captive through philosophy and empty deception, according to the tradition of men, according to the elementary principles of the world, rather than according to Christ.”

Men and women, parents, and leaders of organizations God has revealed truth to us and this truth does not change.  Standing on this truth, making decisions according to truth, teaching truth, and leading our families, co-workers, and organizations in truth is our great privilege and responsibility.  Do not let your heart and mind be taken captive.  Worship the God who established truth, read His word, sharpen your mind, fellowship with others, and prepare your minds to discern and defend the truth.