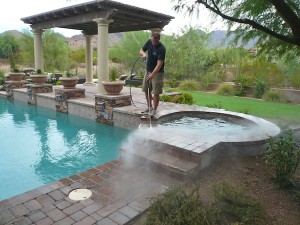 Learning to Finish What You Start

This summer my son wanted to earn some money to purchase video editing software which cost about $300.  I told him that I would match any money he earned so that he could purchase the software.  We found a project to clean the scale from our neighbor’s pool.  The pool has several water features that over spray and mist left large white patches of scale on the wall.  My son bid the project and provided an estimate of $208 to remove the scale.  He used an acid to dissolve the calcium and a wire brush to scrub the
surface.  To our dismay after several hours over 2 -3 days, the surfaces of the pool actually looked worse than when we began the project.  We could not figure out why it looked so bad and did not feel comfortable continuing with the project.  We decided it may be time to bring in a professional pool repair technician to review the project and
offer his input.  My friend Shane who owns Moosehead Pools stopped by and reviewed the work.  He suggested that the surface was not natural stone, but a cast aggregate made to look like stone.  He also thought the chalky white material covering the surface was dirt, pollution and other materials that we released from the surface while cleaning and we should pressure wash the surface to see what we were really dealing with.

My son was over his head and really would have preferred to back out of the project.  My neighbor and I discussed the situation and recognizing this was as much about teaching a life lesson to my son as it was about fixing the problem thought it would be good to push through the problem and work toward a satisfactory solution.  Knowing this would involve renting pressure washing equipment my neighbor offered to pay additional if we expanded the service from cleaning the scale to include pressure washing of all of the pool surfaces.  I certainly did not want to get this involved in the project, but knew my son needed help and would learn a great lesson if we could overcome the problem.
So off we went to Home Depot to rent a 3,500 psi pressure washer and to our
delight the chalky white residue came off.   However, much of the stone surfaces still had the original white stains remaining.  When we applied acid, there was no reaction confirming that it was not calcium.  So we had removed the calcium, pressure washed
the surfaces, and still had areas that were not going to be acceptable to the customer.  We came back with a pumice stone and wire brush and worked for several more hours seeing some improvement, but still not to all or our satisfaction.

I wish I could say that the project ended with everyone happy, but we came to a natural end where we had invested $150 in equipment rental and supplies, 11 hours of work, removed the calcium, put in many hours of additional scrubbing, but did not get all the white materials from the pool.  My son came back and presented an invoice of $294.99.  Our neighbor again used the opportunity to discuss the project and work on negotiation skills with my son.  It was uncomfortable for him as he was asked to defend the amount of the invoice.  My neighbor suggested that we all agree that the project did not turn out as we all had hoped and offered to split the difference between the original estimate of $210 and the ending invoice of $294.99.  My son promptly accepted which my neighbor pointed out the negotiation was too easy.  At this point my son needed some help so I
jumped in and explained that we felt my son had done what he was asked to do and expanded the project to include the pressure washing.  However, he wanted the customer to feel that it was a fair transaction and said he would accept this compromise if he felt good about it.  We agreed and called the project complete.

Many lessons were learned on this project that my son will take with him into life.

I am proud of the way that my son handled the situation and am glad that I got to support him and share in this learning experience.  On the way home, I was sure to tell him that I was proud of him and that I would make up the difference in the negotiated
amount and his quoted amount.  I know he will value his new software and the memory that we created that will last a lifetime.  In closing I am reminded of a saying my dad taught me and his dad taught him.  I guess I have now passed it on to the next generation.

“Once a task once begun, don’tleave it until you’re done.  If the task is great or small do it well or not at all.”